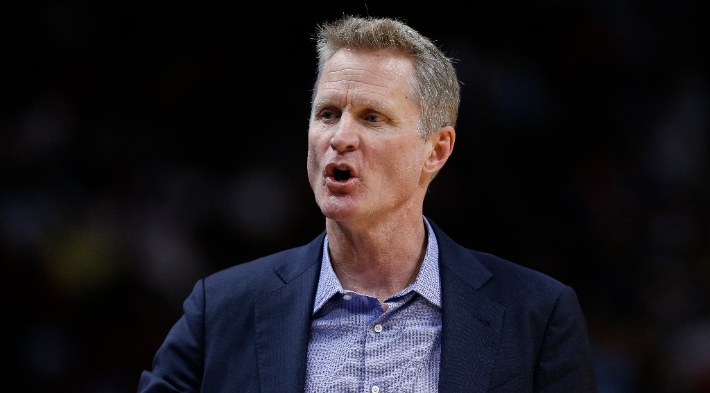 Every NBA team and player has a gripe with officiating at one point or another. Things that should not get called earn a whistle from the officials and vice versa, and with the advent of things like challenges and the league’s Last Two Minutes report, every single officiating decision is put under a microscope.

An area where this is applies more than most is the amount of contact that is required for officials to call fouls on a given night. It’s not the most consistent thing on earth, and in the eyes of Golden State Warriors coach Steve Kerr, the way games are called shows way too much respect to offensive players.

Kerr spoke to the media prior to the Warriors taking on the San Antonio Spurs on New Years Eve, and while he stressed that he does understand why players take advantage of this, he wants to see the league change the rules so refs aren’t “going to call fouls that people would laugh about at a pickup game.”

Interesting comments from Warriors coach Steve Kerr pregame on the league rewarding offense players. He says he’d like to see a reversal in how the league is officiated: “We’ve rewarded offensive players for fooling the officials and attempting to fool the officials.” pic.twitter.com/sc11kIh8ZM

It’s a point that Kirk Goldsberry made in his delightful book SprawlBall, but games are officiated differently at the rim (where you can maul opposing players) and on the perimeter (where grazing someone’s arm with your pinky can lead to three foul shots). That’s before we get into situations like the one he laid out with Paul, where players go out of their way to search for contact because they know officials will have a quick whistle — something that Kerr correctly points out is something players should take advantage of, because it helps their team win games.

The NBA has attempted to crack down on flopping by assessing fines to players, but it obviously hasn’t done enough to deter the practice. Plus, beyond flopping, there’s really no way (or reason) to reprimand players for calls that go in their favor because the officials have a quick whistle on touch fouls. If there is going to be change, though, it’ll likely be because coaches and players decide things need to change, and Kerr seems happy to be at the forefront of this dialogue.

This No-Equipment, 30-Minute HIIT Workout Can Help You Burn Major Calories From Home