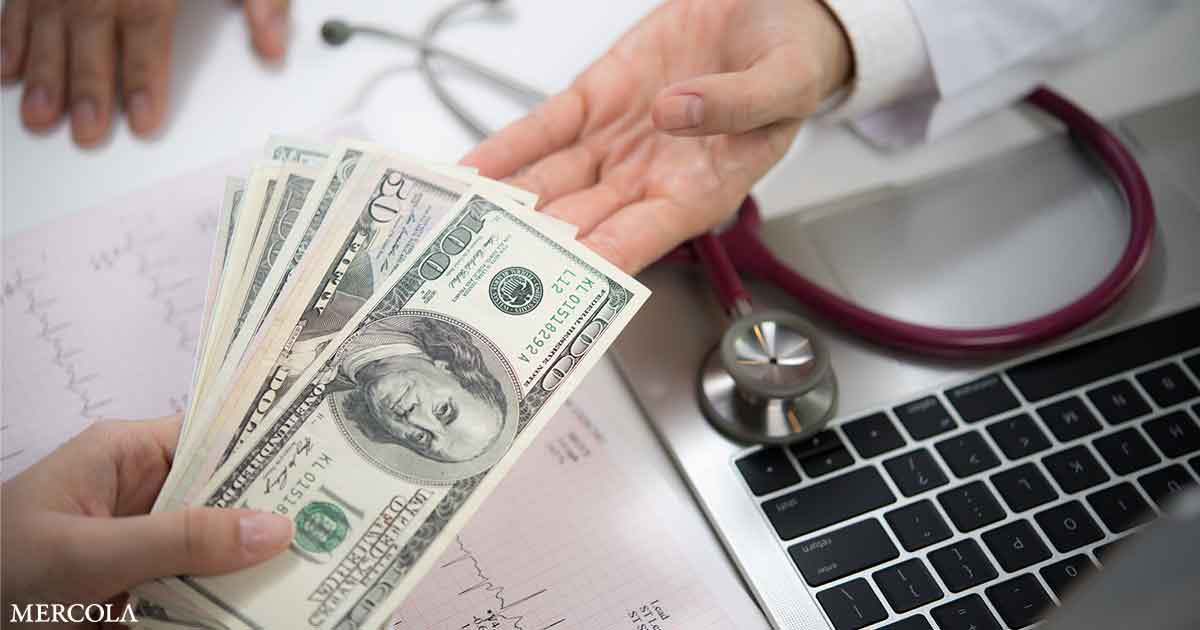 One of the primary roles of the U.S. Food and Drug Administration is to review the safety and efficacy of drugs before they are sold on the U.S. market. In 2016, The BMJ1 suggested a strong conflict of interest when they wrote about a revolving door existing between the FDA and the pharmaceutical industry. In pursuit of monetary gain, this relationship places the health of Americans at risk.

Although these ties have been revealed in the past, two researchers from Oregon Health and Science University suggested many of the medical reviewers at the FDA go on to work for drug companies.2

They found that of the 55 who had worked as hematology oncology medical reviewers for the FDA from 2001 to 2010, 15 had gone on to work with or consult in the pharmaceutical industry. In addition to the pharmaceutical industry’s influence in the FDA, one agency reports3 that in 2018 alone, $9.35 billion was spent on educating and entertaining doctors — that’s more than double the 2013 figure of $4.34 billion.

Big Pharma also keeps a hand in research to ensure their drugs are approved. For instance, when there are significant or severe forms of clinical trial violations in research using human participants, these are classified as an official action indicated, or OAI. In a review4 of FDA inspection reports from 1998 to 2013, researchers found 60 clinical trials classified as OAI used for data in 78 published articles.

Of those, only three mentioned violations found by the FDA including fraud, incompetence and misconduct. In other words, anyone using medical journal data to make decisions may find those decisions are based on fraudulent or heavily flawed published studies.

BMJ Calls for Accurate Research to Back Medical Practice

The BMJ launched a global initiative calling for a reduction in the commercial influence in health care moving toward transparency. In a press release published at the same time as the first article in the collection,5 BMJ’s editor-in-chief, Dr. Fiona Godlee, said:6

“Patients and the public deserve to have evidence they can trust. Commercial influence has no place in scientific research, nor in the education and guidance of clinicians, nor in decisions about diagnosis and treatment. We hope that people around the world support our call for fundamental reforms.”

The journal plans to add more content to the collection to further understanding of the conflict of interest between commercial Industries and medical decisions.7 They brought together experts from eight nations in medicine, law and philosophy to propose fundamental cultural changes with the intention of moving away from commercial influence and closer toward independence.

In trying to balance overtesting, overdiagnosis and overtreatment against necessary procedures for diagnosis, the experts want to ensure dissemination of valid evidence “conducted as independently as possible from industries profiting from their use.” They go on to say:8

“Some see transparency as the best strategy, while others regard it as necessary but insufficient. We argue that endemic financial entanglement is distorting the production and use of healthcare evidence, causing harm to individuals and waste for health systems.”

As such, the group is calling for governments to pass legislation requiring disclosure when medical reviewers are paid by the manufacturers. In addition, they bring attention to countries like Norway that have moved away from acknowledging physicians’ attendance at industry-sponsored events, when it comes to earning continuing educational credits.

The idea that industry-funded studies affect medical decisions is not news.9 The number of clinical studies supported by companies that make a profit from the results is only growing. One example is Johnson & Johnson, the company that sold pelvic mesh to thousands of Australian women while knowing it could be harmful and without warning the women or physicians of the risks.

More than 1,350 women from Australia won a class action suit in November 2019 against Johnson & Johnson for misleading information about the risks of the pelvic mesh implants. The implants were sold by a subsidiary, Ethicon, which is charged with being negligent.

In addition to the Australian suit, Johnson & Johnson agreed to a $117 million settlement to resolve lawsuits about the pelvic mesh implants in 41 U.S. states. The same company was ordered to pay Oklahoma in a judgment in which the state argued Johnson & Johnson was a “kingpin” in the opioid crisis.

Oklahoma Attorney General Mike Hunter specifically identified two subsidiaries of Johnson & Johnson that provided the majority of the raw opium used by Johnson & Johnson and other manufacturers to produce the drugs for the past two decades.10

The women who had the pelvic mesh implanted for treatment of urinary incontinence testified to chronic pain, severe discomfort and bleeding during sex after having the implant. In the ruling against Johnson & Johnson in Australia, judge Anna Katzmann said:11

“The question is whether this conduct considered as a whole was misleading or likely to mislead. I believe it was. The post-market evaluation of all the Ethicon devices was deficient. It fell well below the level of care required of a reasonably prudent manufacturer. The risks were known, not insignificant and on Ethicon’s own admission, serious harm could ensue if they eventuated.”

The history of the relationship between physicians and pharmaceutical companies began in the early 1900s when the Carnegie Foundation contributed to the suppression of homeopathic practitioners.

The infamous Flexner Report gave homeopathic colleges a poor rating based in part on the school offering courses in pharmacology, which the American Medical Association did not consider worthwhile at the time.

Over time, the AMA and Big Pharma came to an understanding and relationship that has linked them ever since. While it may have seemed a logical step in the beginning, it has proven to be disastrous for health.

For instance,12 from 2011 to 2015, the pharmaceutical industry dropped more than $286 million on events attended by Australian clinicians. Some received free travel and lodging for overseas conferences.

This increases the likelihood a practitioner will prescribe the company’s drugs. Although doctors have disputed this, a ProPublica analysis13 found doctors prescribed more drugs after receiving payments. The analysis shows an association and confirms the prevailing perception of a relationship between financial gifts and brand-name prescriptions.

In the wake of a call for transparency and independence from industry-funded research from the BMJ, Dr. Chris Moy, chair of the Australian Medical Association ethics and medico-legal committee voiced concern this may lead to a lack of funding.14

“Who is going to fund all this? Is the government going to fund it? Money makes the world go round, in simple terms. Research will not happen unless there is funding. Medicine is always going to need pharma companies. We cannot be too brutal on them.”

The Tale of Two Journals: NEJM Partners With Big Pharma

As The BMJ fights for transparency to protect consumer health, the New England Journal of Medicine (NEJM) appears to have taken the opposite tack. In 2015, there appeared three articles written by the same author, Dr. Lisa Rosenbaum,15,16,17 in which the journal appeared to shift its support in favor of closer ties between the pharmaceutical industry and the field of medicine.

The study used a noninferiority trial design21 in which an experimental treatment is tested against an active control and approved treatment in use. Noninferiority trials are used when assigning patients to a placebo is unethical. One analysis of the studies came to this conclusion:22

“It is fairly evident that this article was not intended to further scientific progress, but rather to sell a shiny new product … And while by all accounts this novel antimicrobial appears to be non-inferior and likely equivalent to moxiflaxacin, it is the intention and the methodology which we should call into question.”

Further analysis of two more studies published on the same date revealed more holes in the studies, bending the results toward prescribing medications that were likely as effective as those currently being sold. The analysis finished with this conclusion:23

“While each of these articles offer their own distinct set of insults against empiricism, they do so in close temporal and spatial proximity, all published in the NEJM on the same day.”

Reduce Your Use of Big Pharma Products

Pharmaceutical companies have a history of altering information to perpetuate their own financial gain. Purdue Pharmaceutical’s Project Tango is only one example of a company that sought to take advantage of an epidemic they helped create by promoting a program to provide an addictive opioid and then the cure, essentially becoming an “end-to-end” provider.

The industry produces 55% more air pollution than the auto industry, despite being 28% smaller. Massive amounts of waste are also entering waterways near manufacturing plants, contributing to the growth of antibiotic-resistant bacteria.

Seek to make lifestyle choices that will reduce your dependence on drugs. Consider the information in the following articles to help guide your choices for nutrition, exercise and sleep, three foundational pillars to good health.

Anxious about COVID? There’s Only so much You can Control