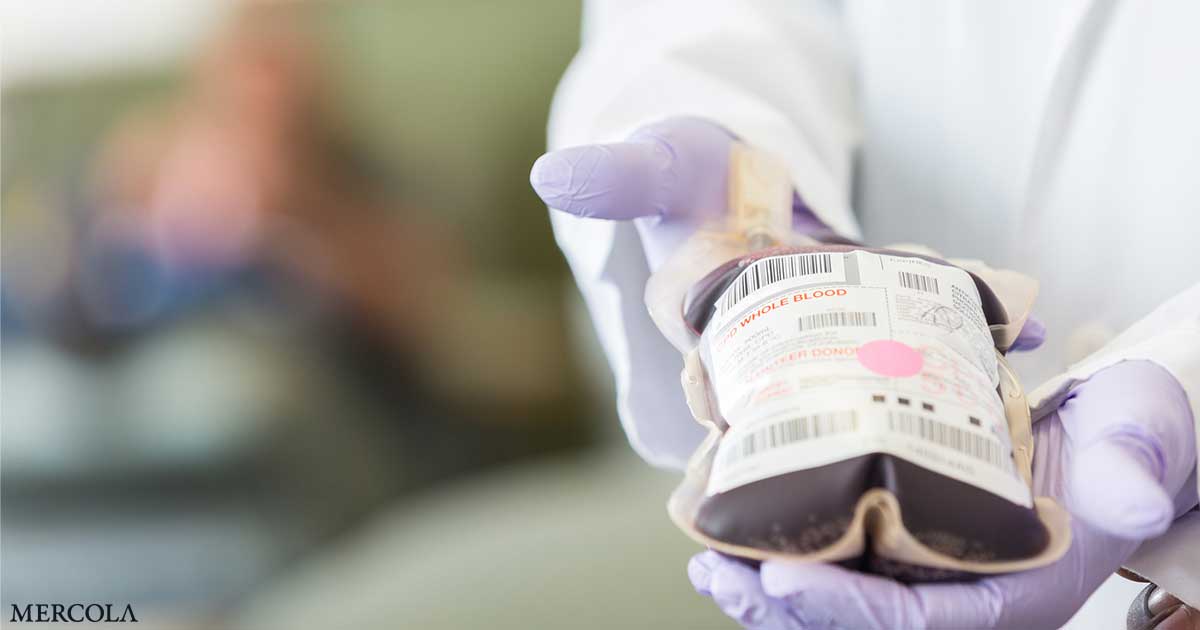 Blood is a living tissue made up of red blood cells, white blood cells, platelets and plasma. The main role of blood in your body is to transport oxygen. It also plays a role in fighting infection, regulating your pH level and temperature, and transporting nutrients and hormones. It also has specialized cells to promote blood clotting.

One factor in blood type — A, B, AB or O — is hereditary and determined by the presence or absence of two antigens, A and B. Your blood type is determined together with a third antigen called Rh factor. Plasma, a mixture of water, protein, fat and salts, is responsible for transporting red blood cells throughout the body.1

When donating blood,2 you’ll answer multiple questions about your health history to ensure the blood may be safely used. The donation process takes about 1.5 hours for whole blood and two hours for plasma. It is safe to donate whole blood every eight weeks, as your body needs between four and six weeks to complete the replacement process.

Vast Volume of Blood Sent Overseas Despite Deficit in the US

Despite many areas of the U.S. struggling to meet the needs of local residents for blood transfusions, an analysis of the blood market shows the U.S. is a major exporter, providing up to 70% of the world’s plasma.3 The majority of plasma exported from the U.S. goes to European countries.

For example, Germany purchases 15% of all blood products exported by the U.S. followed closely by China and Japan. MintPress News reports this is a result of other countries banning the practice on medical and ethical grounds. Of the 1,000 plasma donation centers located around the world, there are 700 in America.4 Many of the donation centers allow people to donate their plasma twice a week.

Vermont is one area the American Red Cross identified as experiencing a critical blood shortage in January 2019.5 The blood donation center in Burlington had posted signs offering free donuts and movie tickets, hoping to entice people to give blood.

However, the Red Cross reports a mere 3% of Americans routinely do this. Mary Brant, Red Cross communication manager for Northern New England, explains “the need for blood is constant and varies on a day-to-day basis.” Every day the region must gather 500 units to meet the needs of the regional hospitals.

The Red Cross manages 40% of the U.S. blood supply. To meet the need, they must collect 13,000 donations of whole blood and 2,500 platelet donations every day. But despite shortages in the U.S., blood accounts for “well over 2% of total U.S. exports by value,” according to Mint Press News and the Observatory of Economic Complexity.6,7,8

The short answer for the blood shortage is money. Plasma is a valuable commodity and based on a growing demand has led to a sharp increase in the number of for-profit collection centers that pay their donors for plasma.9

Since the U.S. allows people to sell their blood, they have now become the third largest exporter with global sales skyrocketing from $5 billion to $20 billion in 15 short years.

By 2016, the industry was responsible for 1.6% of the total exports from the U.S. To put this in perspective, the export of human blood is currently worth more than the export of all corn and soy products covering much of America’s Midwestern states.10

However, this industry is built on the backs of poor Americans. Two companies, Grifols and CSL, dominate the market by targeting low socioeconomic groups in large cities across the U.S. In Cleveland, the majority of donors make more than one-third of their money from donating plasma.

Andrew Watkins spoke to Mint Press News. He sold his blood for nearly 18 months in the Pittsburgh area. He commented on the process and how the companies target lower socioeconomic groups:11

“The centers are never in a good part of town, always somewhere they can get a never ending supply of poor people desperate for that hundred bucks a week. The people who show up are a mix of disabled, working poor, homeless, single parents, and college students.

With the exception of the college students who are looking for booze money, this is probably the easiest and most reliable income they have. Your job may fire you at any time when you’re on this level of society, but you always have blood.

And selling your blood doesn’t count as a job or income when it comes to determining disability benefits, food stamps, or unemployment eligibility so it’s a source of money for the people who have absolutely nothing else.”

The reporter for MintPress News spoke to a number of people who consistently sold their plasma and were fully cognizant of how the system was exploiting their position. However, this exploitation also includes serious health consequences that have not been well-studied.12

Losing plasma two times weekly lowers protein count in the blood, leading many donors to an increased risk of liver and kidney dysfunction and more infections. Those who regularly donated reported feeling chronically fatigued and some were bordering on anemia. Payment methods were described as “predatory” as the first payments may be $75 but they are subsequently reduced to $20 to $50.

A combination of chronic donations with variable payments leave many in a permanent state of mental fatigue with bruised and punctured arms. The centers are kept at 50 to 60 degrees Fahrenheit to protect the plasma. Cooled blood is returned to the donor “in a painful process that feels as if ice is being inserted into the body.”

Exploitation of the poor reaches an all-new low in the clinics along the U.S. Mexican border. Each week, thousands from Mexico cross the border on temporary visas to visit the 43 blood donation centers that prey on these individuals.

MintPress News reports a Swiss documentary identified few checks on blood cleanliness accepted by these for-profit donation centers. One social worker from Georgia commented on the situation in which he found himself:

“I’ve known quite a number of people who rely on money made by selling plasma. A lot of times it’s to cover childcare or prescriptions or something along those lines. It’s absolutely deplorable to leverage literal blood money from people who have so few options.”

Big Pharma is also going after students. One campaign from Grifols targets working class students, promising them money for books in exchange for their plasma.13 The push for young blood is in high demand in Silicon Valley, where companies are focusing on a push toward antiaging technology.

Despite having no clinical evidence the process works, one company charges $8,000 for an infusion of young blood to aging executives. The co-founder of PayPal, Peter Thiel, has become a committed customer. MintPress News reports he is spending large amounts of money to fund startups focused on antiaging technology.

He has been vocal about “the ideology of the inevitability of the death of every individual,” claiming humans have been conned into believing immortality is not possible and believes his own ability to live eternally is close.

Liver Disease May Drive Thirst for Blood in China

In a report from WinterGreen Research,14 scientists found high demand in China, where a major cause of death is liver disease. They identified 400 million in China with different liver ailments including viral hepatitis and nonalcoholic fatty liver disease.

Nearly 400 metric tons of serum albumin were consumed in China in 2017, accounting for half of the total global use of serum albumin. While this supply could easily be acquired from those in China, many became afraid to donate after thousands of farmers developed HIV from unsanitary needles used to collect blood in the 1990s.

A result of this is the necessity to import 60% of the needed serum albumin as demand rises with an increasing number getting sick and the Chinese population fearful of donating.

Despite Toxic Chemicals, US May Be One of the Safest Sources

The report identified the quality of blood collected in the U.S. is better than what may be collected in China, giving American companies an edge. However, it is important to note while the U.S. may be one of the safer sources of blood, the notation is made as a comparison against others and not based on an evaluation of the source.

In other words, environmental contaminants in the U.S., including known carcinogens and radioactive substances, are part of your body’s toxic burden passed on with blood and plasma donations. This comes from a wide range of sources, including pesticides found in agriculture and in the home, preservatives, industrial chemicals and wastes, air pollution and building materials.15

In a report from the Environmental Working Group (EWG),16 scientists identified more than 1,400 known or likely carcinogenic chemicals to which we are exposed on a daily basis.

In their analysis they found 420 chemicals measured in a diverse population and identified nine in nontrivial levels, exceeding EPA safety standards. Author of the report and senior scientist for EWG, Curt DellaValle, commented on the difficulty of associating exposure to disease:17

“It’s hard to make the connection between being exposed to something and getting the disease because the disease is going to develop five, 10, 20 years later. I hope something like this raises some awareness that these exposures are out there, there are some dangers generally … and we should work to try and reduce those exposures.”

This toxic load is a real concern as questions about how these chemicals react together have not been answered. The most recent general report by the CDC on exposure to environmental toxins was published in 2009,18 in which they found detectable levels of 212 chemicals in the blood and urine of participants from across the nation.

Exposure to toxins has not declined, as more are released in personal care products, cleaning supplies and building material without adequate safety testing. Take care to reduce your exposure by using products the EWG has tested safe from their Skin Deep database19 and consider using nontoxic cleaning products.

Building a Focused Person, Ages 14-Plus

What are the risk factors for addiction?