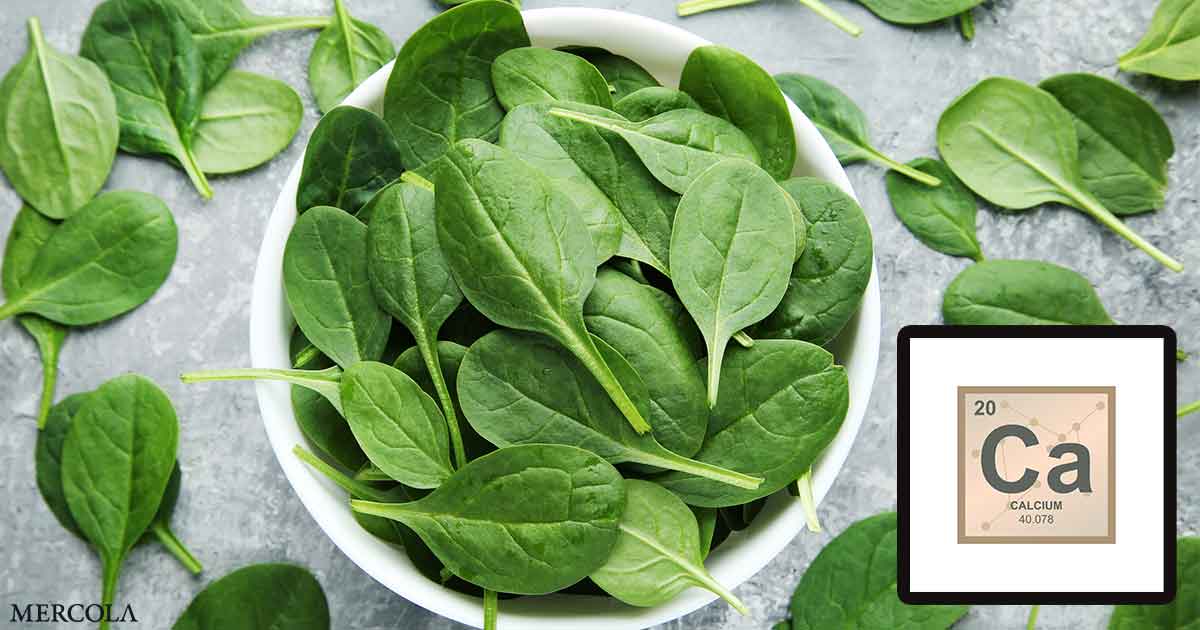 Oxalate, also known as oxalic acid, is found in a wide variety of fruits and vegetables. While not harmful in and of itself — your liver actually produces oxalate naturally1 — oxalates can cause problems when they over accumulate.

Over accumulation can occur either from overconsumption, or because your body either absorbs exceptionally high amounts of soluble oxalates or overproduces oxalate (primary hyperoxaluria2), or if you excrete excessive amounts of urinary calcium (hypercalciuria3).4

An over accumulation of oxalate in your kidneys can lead to the development of calcium oxalate kidney stones, the most common type of kidney stones.5 The stones form when your urine becomes highly concentrated, allowing the calcium and oxalate from your diet to crystallize.

If you are predisposed to kidney stones or have calcium oxalate stones already, your doctor may recommend avoiding foods rich in oxalates, such as dark green vegetables (especially spinach and Swiss chard), bran, rhubarb, beets and beet greens, chocolate, nuts (especially almonds, cashews and peanuts) and nut butters.6,7

Is Calcium and Oxalate in Combination Good or Bad?

In the past, kidney stone sufferers have also been warned to avoid foods rich in calcium. However, as noted in a 2004 paper in the Journal of the American Society of Nephrology, this strategy was never actually proven to reduce the risk.8

“By contrast, already in 1969, a Ca-restricted diet was shown to increase the gastrointestinal absorption of oxalate, leading to increased amounts of oxalate in the urine and an increased risk of the formation of Ca oxalate stones,” the paper states.9

Today, experts have largely abandoned the recommendation to limit calcium, as we now know this may do more harm than good. A 1997 study10 in the Annals of Internal Medicine that looked at 12-years’ worth of data from 91,731 women who participated in the Nurses’ Health Study concluded:

In 67% of women who took supplemental calcium, the calcium either was not consumed with a meal or was consumed with meals whose oxalate content was probably low …

While increasing calcium in your diet may seem counterintuitive, seeing how calcium is the largest component of these stones, the answer to this paradox is that high dietary calcium actually blocks a chemical action that causes the formation of the stones in the first place. As explained by the Cleveland Clinic:11

“Low amounts of calcium in your diet will increase your chances of forming calcium oxalate kidney stones … [C]alcium binds oxalate in the intestines. A diet rich in calcium helps reduce the amount of oxalate being absorbed by your body, so stones are less likely to form.

Eat calcium rich foods and beverages every day (2 to 3 servings) from dairy foods or other calcium-rich foods. Also, eating high calcium foods at the same time as high oxalate food is helpful …”

Third, research has shown that the overall combination of foods that we eat during a meal (including both oxalate-containing and non-oxalate-containing foods) can significantly impact the amount of soluble oxalates available for absorption from our digestive tract.

We’ve seen a study on Indian cuisine, for example, in which multiple-ingredient dishes like spinach (palak) also containing Indian cottage cheese (paneer) lowered the amount of soluble oxalates available for absorption by about 15-20%. So, as you can see, the relationship between dietary intake of oxalates and oxalate absorption is complicated …”

Ten volunteers ate 100 grams of grilled spinach either alone, or with one of the following:

Urine oxalate output was measured over a 6-hour and 24-hour period after eating. According to the authors, “Addition of sour cream and Calci-Trim milk reduced the availability of the oxalate in the spinach significantly in both the 6-hour and 24-hour collection periods.”

Painful kidney stones are not the only problem that can be caused by an accumulation of oxalate crystals. While your kidneys are the most commonly affected organ, oxalates can affect other organs and conditions as well. Examples include fibromyalgia and vulvodynia (vulvar pain).15

Oxalate stones can also be a source of inflammation and significant oxidative damage.16 Oxalate also impairs the absorption of nonheme iron and can lower your iron stores,17 needed for red blood cell formation.

What’s more, oxalates have the ability to chelate a number of toxic metals, including mercury and lead. Unfortunately, they do this by trapping the heavy metals in your tissues, which makes it difficult to eliminate them.18

Another study,19 published in the Journal of the American Society of Nephrology in 2004, notes that “2 to 20% of ingested oxalate is absorbed in the gastrointestinal tract of healthy humans with a daily 800 mg calcium intake,” and that “Calcium is the most potent modifier of the oxalate absorption.”

I regularly consume two foods that are high in oxalate: our fermented beets that I use to increase my nitric oxide and sweet potatoes. I add one-half teaspoon of finely crushed egg shells to bind to the oxalates when I eat these foods.

In the 2004 study, to assess the exact correlation between calcium intake and oxalate absorption, healthy volunteers were given 0.37 millimole (mmol) of soluble salt sodium oxalate. Their calcium intake ranged from 200 mg to 1,800 mg.

With 1800 mg calcium per day, the mean absorption was 1.7% … The findings may explain why a low-calcium diet increases the risk of calcium oxalate stone formation.”

When Eating Oxalate-Containing Food Take It With Your Calcium Supplement

As noted in the 1997 Annals of Internal Medicine study21 mentioned earlier, dietary calcium and calcium supplementation do not have identical effects. Whereas calcium-rich foods lowered the risk of kidney stones by 35%, calcium supplements raised it by 20%.

To reiterate, the reason for this discrepancy appears to be because most people either take their supplements on an empty stomach or with breakfast, which tends to be low or void of oxalates. Few actually eat veggies for breakfast.

That said, you can avoid this heightened risk by making sure you take your calcium supplement with lunch or dinner instead, which hopefully includes some leafy greens and other vegetables (i.e., oxalate-rich foods).

This will allow the calcium from your supplement to bind with the oxalate from the food in your intestine, and be safely eliminated through your stool rather than accumulate (and potentially crystallize) in your urine. Another alternative would be to take your supplement with a green smoothie or fresh-pressed vegetable juice in the morning.

While we’re on the subject of calcium supplements, an inexpensive and all-natural alternative to calcium tablets is to grind clean, discarded, dried egg shells into a fine powder that you can then add to foods, smoothies and green juices.

According to one study,22 consuming just half an eggshell can supply you with the recommended reference daily intake of calcium (1,000 mg) for adults (age 19 to 50).23 You can read more about this technique, and its benefits, in “Is Eating Eggshells Beneficial?”

To summarize, if you’re taking a calcium supplement, take it with lunch or dinner to minimize your risk of kidney stones. If you don’t take a calcium supplement, consider eating your veggies (and other high-oxalate foods) with a calcium-rich food. Examples mentioned included eating cooked spinach with some cottage cheese or sour cream. A glass of raw, organic milk or some organic raw butter could also do the trick.

All of that said, the No. 1 reason for kidney stone formation is dehydration, so staying well hydrated should be at the top of your list. If you aren’t drinking enough water, your urine will have higher concentrations of substances that can precipitate out and form stones. As noted by the National Kidney Foundation:24

“Urine has various wastes dissolved in it. When there is too much waste in too little liquid, crystals begin to form. The crystals attract other elements and join together to form a solid that will get larger unless it is passed out of the body with the urine… In most people, having enough liquid washes them out or other chemicals in urine stop a stone from forming.”

The American College of Physicians’ guidelines25 recommend drinking enough water to produce at least 2 liters of urine per day. Sugar (especially processed fructose), and hence processed foods are other contributing factors that are best avoided if you’re concerned about kidney stones.26,27 Limiting animal protein and supplemental vitamin C is also recommended for those at risk of stone formation.28

Also be sure to get plenty of exercise to keep your body’s fluids moving. Lastly, make sure you’re getting adequate magnesium and vitamin B6 in your diet, as these nutrients may help prevent kidney stone formation.29

The combination of potassium citrate and magnesium citrate has also been shown to be “an effective countermeasure for the increased risk of renal stone disease associated with immobilization,” according to one study.30 Another found potassium/magnesium citrate “effectively prevents recurrent calcium oxalate stones,” and when taken for up to three years can reduce your risk of a recurrence by 85%.31

How Adversity Makes You Stronger