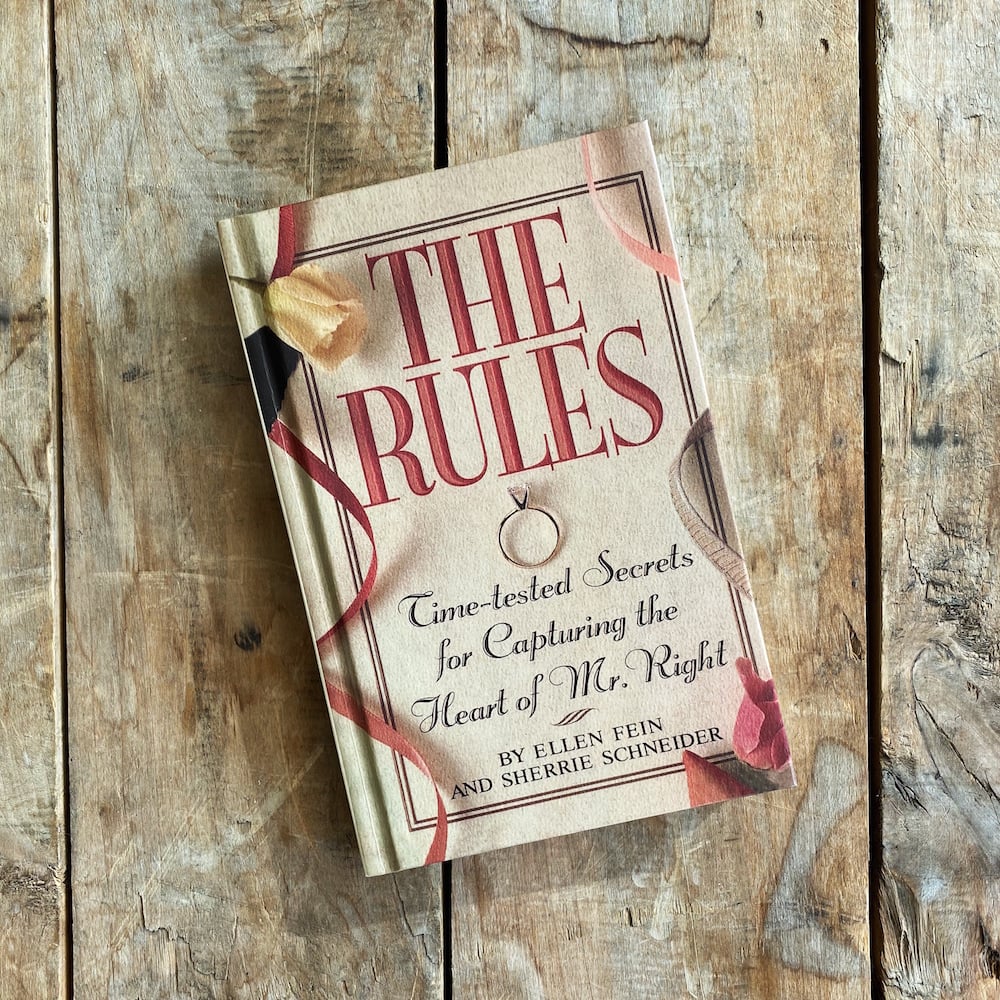 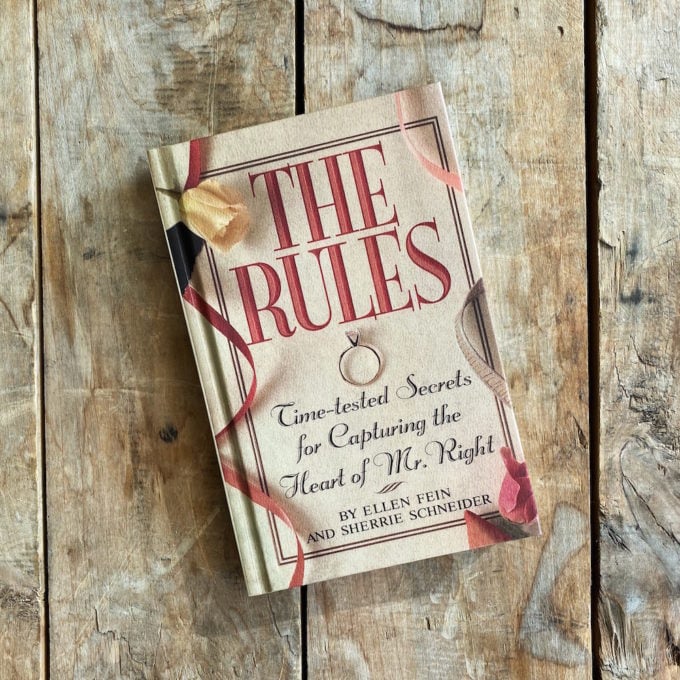 A couple weeks ago, over lunch at the office, we started talking about the classic dating book The Rules. In its heyday, it sold over two million copies in 27 languages. Curious as to how it holds up, we got our hands on an old copy and discovered much of the advice is pretty shocking…

As best as anyone can tell, The Rules were born in 1917, when the authors’ friend Melanie’s grandmother (still with me?) liked to play “hard to get.” Melanie’s grandma was a woman who had “more marriage proposals than shoes,” the book boasts, like the only thing more covetable than footwear is marriage proposals, plural. Grandma’s advice was passed down through the ages, until 1995, when it fell upon two enterprising sets of ears. They compiled it into a book, The Rules, where it would spark cultural debates and give women 35 more mandates to stress about.

Here are some of its greatest gems, with commentary:

Rule # 1: Be a Creature Unlike Any Other
What, exactly, does this mean? Should one act like a unicorn? Like a narwhal? The book goes on to explain, “Being a creature unlike any other is really an attitude, a sense of confidence and radiance that permeates your being from head to toe. It’s the way you smile (you light up the room), pause in between sentences (you don’t babble on and on out of nervousness), listen (attentively), look (demurely, never stare), breathe (slowly), stand (straight), and walk (briskly, with your shoulders back).” Ohhh, I see. Like Miss America.

Rule # 2: Don’t Talk to a Man First (and Don’t Ask Him to Dance)
Wait. Dances? Where are these dances, and why has no one invited me?

Rule #4: Don’t Meet Him Halfway or Go Dutch on a Date
“Men (real men) pick women up at their apartments or offices for dates.” Unless they are from the internet and you don’t want them to know where you live. “Invariably, we find that men who insist that their dates meet them halfway or (worse) on their own turf, turn out to be turds.” I agree that schlepping all over creation is not a good way to begin a relationship. I’ve also realized that the word “turd” is pretty hilarious.

Rule #5: Don’t Call Him and Rarely Return His Calls
Because people LOVE being ignored. It makes them feel good and sets you up for a lifetime of open and honest communication.

Rule #6: Always End Phone Calls First
You know when you call a big company — the bank, an airline, your health insurance provider — and after suffering through seventeen minutes of flute-heavy hold music, somebody finally answers, only to hang up on you? Apparently, that feeling drives men wild.

Rule #9: How to Act on Dates 1, 2, and 3
“If you’re anything like us” — I AM NOTHING LIKE YOU — “you’ve named the children before he says hello.” This is bad, the book tells us, because men can smell your unfulfilled longing. And daydreaming can lead you to blurt out “silly things” like the dreaded M-word (marriage). “All you really have to do on the first three dates is show up, relax, and pretend you’re an actress making a cameo appearance in a movie.”

Rule #10: How to Act on Dates 4 through Commitment Time
“Don’t overwhelm him with your career triumphs. Try to let him shine!” BUT YOU JUST TOLD ME I AM A CREATURE UNLIKE ANY OTHER. Do I not shine?

Rule #12: Stop Dating Him if He Doesn’t Buy You a Romantic Gift for Your Birthday or Valentine’s Day
“When a man wants to marry you, he usually gives you jewelry, not sporty or practical gifts like a toaster oven.” Truth: If my date gifted me a toaster oven, I would be forced to conclude that he didn’t know me at all, had never seen the size of my (nonexistent) apartment kitchen, and had a strange affinity for toasted foods. But! To someone, a toaster oven might be a dream gift. Let us remember that only one of the five love languages is “receiving gifts.” There are far more important things in this world than whether someone gives you jewelry.

Rule #20: Be Honest But Mysterious
“Men love mystery!” this chapter proclaims. “Before he comes to your apartment, tuck this book away in your top drawer and make sure any self-help books are out of sight. Have interesting or popular novels or nonfiction books in full view. Hide in the closet any grungy bathrobes or things you don’t want him to see.”

Rule #22: Don’t Live with a Man (or Leave Your Things in His Apartment)
“Move in only if you’ve set a wedding date.” Otherwise, the man will see you do things like floss, and he might realize you are human.

Rule #31: Don’t Discuss The Rules With Your Therapist
Hark! A red flag. “Some therapists will think that The Rules are dishonest and manipulative,” the book warns. “They will encourage you to be open and vulnerable in your relationships, to talk things out, not to keep your feelings of love or hurt inside.” I mean, yeah. Your therapist would encourage such things because THAT IS CALLED BEING A HEALTHY PERSON. And for what it’s worth, so would I.

Rule #35: Be Easy to Live With
The final rule encourages women to be pleasant… for all of time. “As hard as you worked to be hard to get, now you must work to be easygoing.” I don’t know about you, but any sentence that includes the words “must work” pretty much makes me want to do the opposite. How about this: Be yourself. And be considerate.

“Do The Rules and you’ll live happily ever after!” we are told. And maybe, if a fairy tale is your end goal, this is the roadmap for you. But if you seek a new kind of romance — full of growth and surprises and the singular glow of living in a way that is true to yourself — well then, make up your own damn rules. You could even write a book about them! It might just be a bestseller.

P.S. An (actually) awesome dating tip and on being single.

What causes the heart to skip a beat?

An Insta-Famous Fitness Model Has Been Charged With Trafficking MDMA