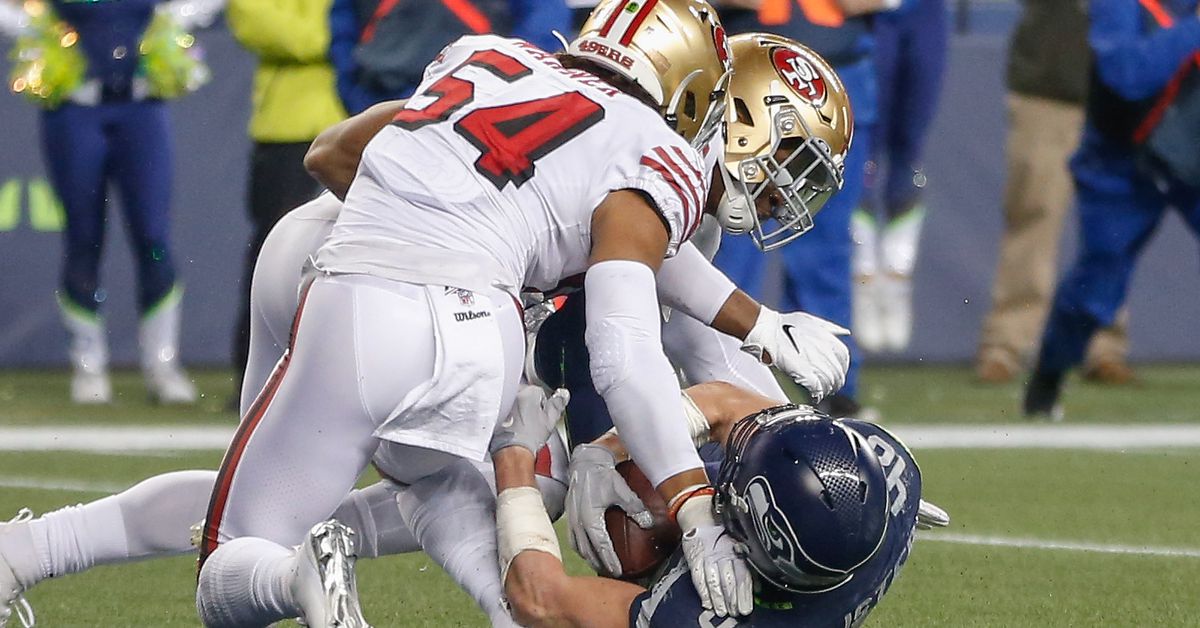 The NFL’s decision to flex the battle for the NFC West between the 49ers and Seahawks into the primetime slot in Week 17 was a good one. The Seahawks being involved in close, exciting, and sometimes obscenely ridiculous games is a well-documented phenomenon. The 49ers’ last four games were decided on the final play. The first meeting between these two teams was an instant classic.

In other words, the rematch was always going to be must-watch TV. And the second meeting was more of the same, which is a good thing.

It was all the late-game heroics you expect from the Seahawks except … they came up short? Somehow, the 49ers escaped from Sunday’s game with a 26-21 victory, earning the top seed in the NFC for the postseason.

It was extremely close. In fact, it came down to just a couple of inches, and it was particularly nerve-wracking.

Let’s talk through that ending and its implications.

San Francisco, after going into the half with a 13-0 lead, allowed the Seahawks to score on three consecutive possessions before getting the ball back in the fourth quarter with the ability to close out the game. But instead, they killed their own drive with an absolutely brutal penalty from center Ben Garland.

On a second-and-7 from their own 24-yard-line, the 49ers ran the ball with rookie receiver Deebo Samuel. Garland, starting in place of the injured Weston Richburg, got out in space to make some blocks, and clearly didn’t hear the whistle being blown when Samuel was tackled.

So when he went out to make a standard block, he was called for unnecessary roughness, a 13-yard penalty that gave the 49ers a third-and-17. It also stopped the clock.

The 49ers eventually had to punt and the Seahawks, with just over two minutes to go, did what they always do: march down the field with ruthless efficiency.

How the Seahawks came SO close to winning it

Because they possess zero chill, the Seahawks live for moments like those. They went from their own 27-yard-line into the red zone. The 49ers pushed the Seahawks all the way to a fourth-and-10 from the San Francisco 12-yard line, but Wilson completed a pass to John Ursua, a rookie making his first reception of the year! That play went to the 1-yard line.

Seahawks offensive lineman George Fant was shaken up on the play and struggled to get to the line of scrimmage to clock the ball. Wilson eventually got a snap off with 22 seconds left in the game, but the disarray that followed cost Seattle.

Marshawn Lynch, who’d previously come up golden in a goal-line situation for the Seahawks, didn’t take the field until the play clock had already run down to approximately 21 seconds. Wilson had no chance to get a play off, and the ensuing delay of game penalty moved their second-and-goal play back to the 6-yard line — a penalty about as costly as Garland’s for San Francisco.

After the game, head coach Pete Carroll was diplomatic about his team’s sloppy change-up that resulted in a finish-altering delay of game.

“We called the personnel and we didn’t get it communicated with the backs,” Carroll told the press in his postgame conference, per ESPN’s Stacy Jo Rost. “We were late getting in there. We just didn’t get it done … we didn’t get the substitution done properly and we were late with it.”

Wilson then threw incomplete to Tyler Lockett, then incomplete to Jacob Hollister. On the latter pass, Hollister was being aggressively covered by linebacker Fred Warner, and Seahawks players wanted a pass interference call:

Booth ref: “He’s clearly got him grabbed…significantly hindering the receiver. This should be a booth review. I’m surprised they haven’t stopped the game.” ‍♂️ pic.twitter.com/90HrDFuKb7

However, they didn’t get one:

Al Riveron on the Non-PI call:

“But we did review it. What we see is, we see the offensive player come in and initiate contact on the defensive player…and there is contact by the defender on the receiver — nothing that rises to the level of a foul based on visual evidence.”

It really did come down an inch or two

On fourth down, Wilson went to Hollister again, and was complete, but he was short of the goal line with a Herculean effort on the stop from linebacker Dre Greenlaw.

The ball also came loose and 49ers safety Jimmie Ward scooped it up and acted like he recovered a fumble, sending players from the sidelines onto the field. More chaos ensued before the officials reviewed it and confirmed it was a completed pass short of the goal line, then a tackle, resulting in a turnover on downs.

The 49ers got the ball back with nine seconds to go, and Jimmy Garoppolo ran a quarterback sneak to prevent the safety, sealing the win and the top seed for the 49ers.

How the 49ers’ win affected the NFC playoff picture

Here’s a look at the final NFC standings:

That game was everything the NFL wanted it to be, and then some. It was a fairly typical Seahawks game by recent standards — so much so that it was easy to write off the 49ers well before the Seahawks got into the red zone. But the ending wound up being more chaotic than we could have predicted.

San Francisco now has the top seed in the NFC, which means homefield advantage and a first-round bye. The Seahawks fall to the fifth seed, and will travel to face the Eagles in the Wild Card Round of the playoffs.

NFL Draft 2020: Why Raiders trading up for Jeff Okudah is perfect move