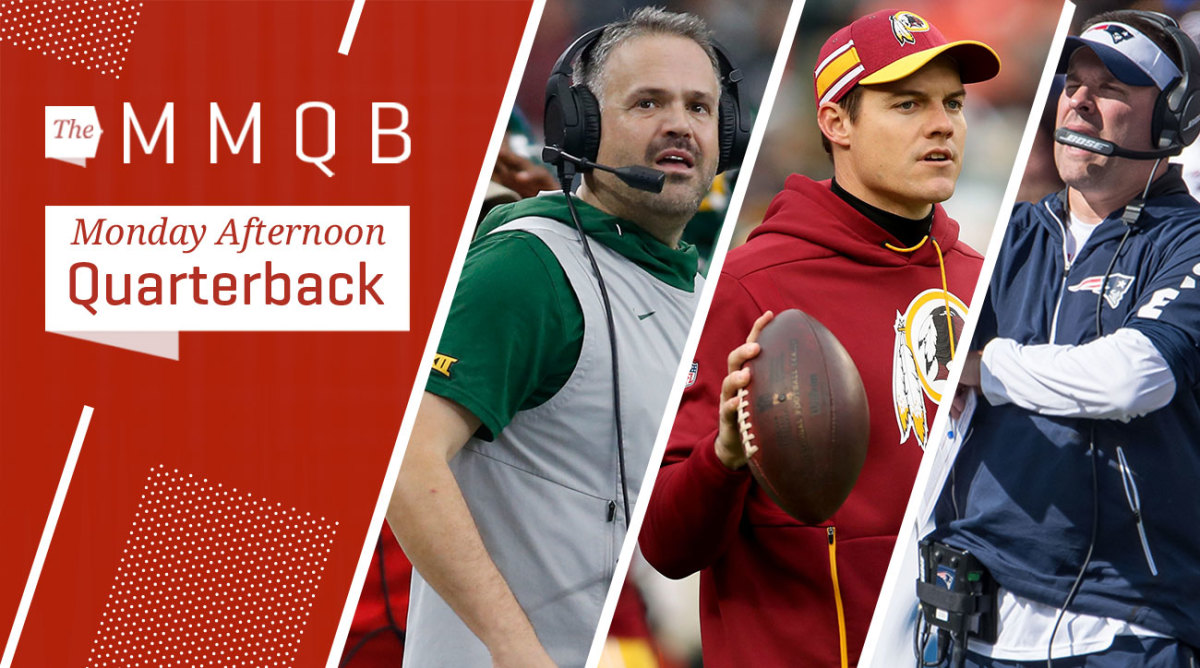 If you stick around through our nuggets, I’ll give you guys a very, VERY early mock draft. Deal? Deal. Let’s go …

I mentioned this on Twitter: the Giants have received feedback that some coaches would be lukewarm on the job based on what’s perceived as an old-school structure gone stale. The thinking there is that too many people have been in their jobs for 10, 20 or even 30 years, and that the organization needs a bit of a reset.

My understanding is that Baylor coach Matt Rhule is among those who feel that way. If he’s going to land back where he was assistant offensive line coach in 2012, there’ll have to be some changes in how things are set up.

• As we mentioned this morning, expect Rhule to be interviewed by least three places (New York, Dallas, Carolina), and expect that he’ll be very measured in his approach after what he went through last year. There’s no way he’s going to a place that isn’t aligned with him philosophically or tries to impose staff on him. He’s a natural fit in New York, and my feeling is they would be the most likely to land him.

• The Browns’ head coaching search could be similar to the Giants’—the way the franchise is set up could look different after the team hires a new coach. Patriots offensive coordinator Josh McDaniels has long been a favorite of the Haslams. He didn’t even get an interview last year in large part because GM John Dorsey led much of the search—and there was a belief that Dorsey was leery about hiring a head coach coming from a place where the coach is king (especially after his experience with Andy Reid in Kansas City, and what happened with McDaniels and Dorsey’s close friend, Chris Ballard, in Indianapolis). So if the Haslams choose McDaniels? It’s fair to say Dorsey would become a figure to watch.

• If you don’t believe McDaniels is ready to leave New England for a head coaching job, look no further than the detailed plan he has for staffing. Redskins offensive coordinator Kevin O’Connell is on his list, along with Colts secondary coach Jonathan Gannon, who coached in Indianapolis the last two years because he was on McDaniels’s Ohio-heavy Colts staff list. To get the Cleveland native Gannon this time around, McDaniels would, presumably, have to make him defensive coordinator.

I think McDaniels would take either the Cleveland job or the Carolina job, if things are structured right.

• O’Connell has become an interesting figure. Incoming coach Ron Rivera could keep him in D.C.—he’s under contract and has a great rapport with 22-year-old quarterback Dwayne Haskins. Or he could wind up on McDaniels’ staff (sources say he’s on the Patriots OC’s staff list). The 34-year-old O’Connell is regarded as a future head coach, with great potential as a developer of quarterbacks and as a play-caller. McDaniels coached O’Connell as a player in 2008, his rookie year in New England.

• Dolphins offensive coordinator Chad O’Shea was let go, and I’m told that part of it was Brian Flores’s desire to move away from his Patriot roots on that side of the ball. Why does that make sense? My theory is that since Miami’s going to be really young the next couple years, running a scheme with the complexity of New England’s might be tough on the players developmentally. Which is why it wouldn’t surprise me if we see some more college ideas infused into what Miami is doing.

• A leftover from my conversation with Carson Wentz on Sunday night—I asked if the obvious turning point for the offense, halftime of the Week 14 game against the Giants in the rain, was the actual turning point. His answer:

“Everyone’s asked that, and it’s hard to kind of put your finger on one thing. I think the tempo offense helped, I think Coach [Doug Pederson] was dialed in with play calls. But at the same time, we just weren’t executing in the first half. We knew we were just missing a lot of things and if we could just execute them at a higher level we’d be in good shape. And guys kept answering the bell and for me, it was just now or never to just, ‘Hey, trust whoever it is out there to make a play,’ and guys responded well and it’s been fun.”

Like I said before, I believe Wentz’s ability to lift guys like Greg Ward up, which is in part due to the trust he’s referencing, is the Eagles QB taking the next step in his development. Which is huge for the whole franchise.

• The Titans are an interesting matchup for the Patriots, as New England prepares for its first wild-card game in a decade. There’s Mike Vrabel there, of course, who played for Bill Belichick from 2001-08. There’s defensive coordinator Dean Pees, who was Belichick’s defensive coordinator from 2006-09, and was a part of a Baltimore staff that won in Foxboro in the playoffs. There’s quarterback Ryan Tannehill, who was in the division for seven years. There’s former Patriots Logan Ryan, Dion Lewis and Malcolm Butler (though Butler’s on IR). And there’s GM Jon Robinson, who was Belichick’s college scouting director for eight years. Add that to the fact that Vrabel’s Titans blew up the Patriots 34-10 in Nashville last year, and Saturday night should be compelling.

• Seattle staffers spoke exceedingly highly of rookie linebacker Cody Barton in the spring and summer. I even had one compare his weekend at rookie minicamp to Russell Wilson’s in 2012, as far as having a young guy jump out right away. Well, now we get to see it. With veteran Mychal Kendricks down, Barton becomes the Seahawks’ strongside linebacker and will start for them against the Vikings on Sunday.

• Now, with the top 20 picks of the NFL draft set, something to get you ready for draft season …