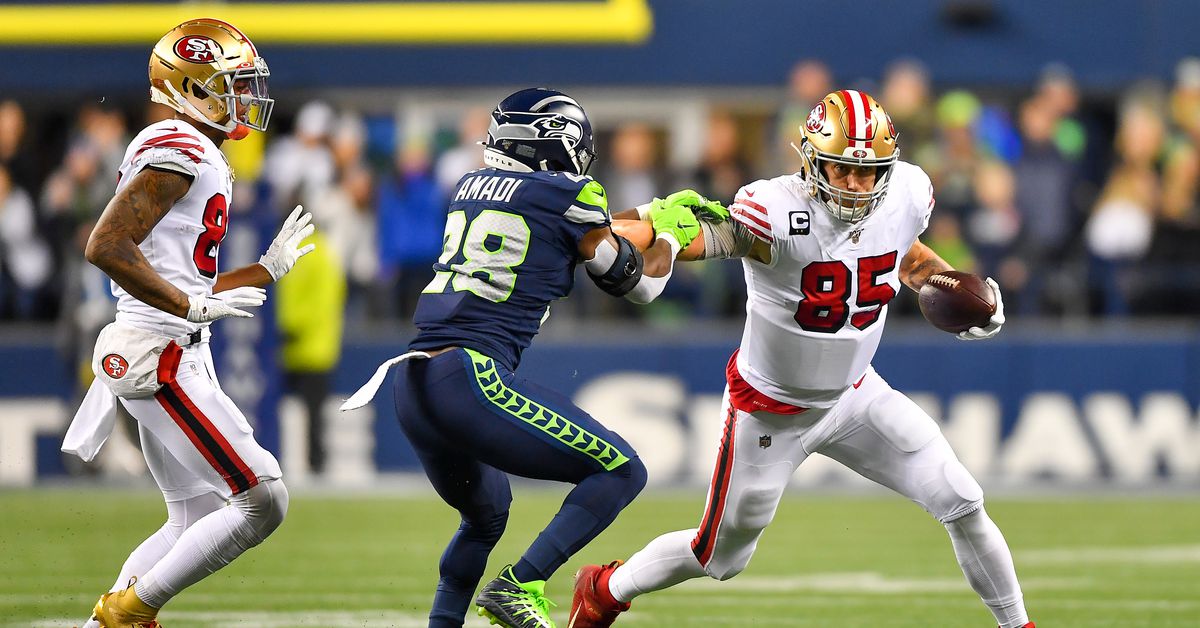 We did it! We made it through another regular season in the NFL. The final Sunday of the year left a few questions to answer about the playoff picture, but after the 49ers’ unbelievably tense win over the Seahawks on Sunday Night Football, we know which 12 teams are left standing in the race to Super Bowl 54.

Coming into Week 17, only the Ravens, Bills, and Vikings were locked into their playoff seeds. That left six teams fighting for first-round byes, including four teams in the NFC. After Sunday night, the Seahawks and Packers got the NFC’s top two seeds, and the Chiefs ended up with the other playoff bye in the AFC.

Meanwhile, five teams were battling for the two spots that were still undecided: the NFC East winner and the final wild card spot in the AFC. The Eagles and Titans, who both just needed a win, handled their business and punched their ticket to the postseason.

Let’s take a look at the upcoming playoff schedule.

The 2020 playoffs kick off on Saturday, Jan. 4. The conference championship games will be on Jan. 19, and the Super Bowl is set for Feb. 2. Here what the first two rounds look like (all times listed are Eastern):

Now let’s check out how each team was (or wasn’t) able to clinch a playoff spot or seed in the last week of the regular season.

The Chiefs earned the No. 2 seed and a first-round bye with:

Patrick Mahomes’ Chiefs wrapped up the AFC West with their 23-16 win over the Patriots in Week 14.

Here’s what they needed to get a first-round bye:

The Chiefs beat the Chargers, which wasn’t a surprise. That second scenario seemed like a long shot, since New England was a 16-point favorite over Miami, but it actually happened! That gives the Chiefs the No. 2 seed.

The Patriots missed out on a first-round bye because:

Ryan Fitzpatrick led the Dolphins into Foxborough for a shocking 27-24 win. That, coupled with Kansas City’s win, means the Patriots are the No. 3 seed. New England had had a first-round bye in every season since 2010. The streak is now over!

The Titans made it into the playoffs with:

Back-to-back losses to the Texans and Saints made Tennessee’s late-season playoff push less feasible, but the Titans were still in control of their own destiny.

Here’s how they could nab the No. 6 seed in the AFC:

The Texans defeated the Titans in Nashville a couple weeks ago, though Tennessee was a 3.5-point favorite this week. That’s because Bill O’Brien rested some of Houston’s starters for Week 17. The Titans won the rematch, and that’s all they needed to take the last spot in the AFC. They will head to New England for the Wild Card Round.

The Raiders needed a lot of help, and came up short of a playoff bid because:

When I say they needed a lot of help, I mean Jon Gruden’s team needed five different things to happen. Those were:

For that strength of victory win to happen, Oakland needed just one of these things to happen:

The Bears beat the Vikings, which took care of one part of the equation.

However, the Titans’ win over the Texans knocked the Raiders out even before Oakland’s loss to Denver went final.

The Steelers could’ve clinched a playoff spot this weekend with:

Despite losing back-to-back games to the Bills and Jets, the Steelers still had a chance to get the No. 6 spot in the AFC. The Steelers would need a couple things to go their way, though. Those included:

For the Steelers and the Raiders to end up with the same strength of victory, these four results needed to happen:

1. The Vikings beat the Bears
2. The Packers beat the Lions
3. The Chiefs beat the Chargers
4. The Dolphins beat the Patriots

But the Vikings (who were playing mostly backups) lost to the Bears, and the Titans beat the Texans.

Pittsburgh’s quarterback situation took a hit after Mason Rudolph was ruled out for the season and placed on the IR with a shoulder injury. So the Steelers had to stick with Devlin Hodges, who struggled against the Ravens’ backups in a 28-10 loss.

The Eagles sewed up the NFC East with:

Philadelphia still has business to take care of even after its win over Dallas last week. To clinch the division, Philly needed:

It wasn’t easy. The Eagles have dealt with a slew of injuries all season, and were without Carson Wentz’s favorite target, Zach Ertz, for this week, too. The Giants hung around most of the game, until Philadelphia pulled away for the 34-17 win — and the division title.

Dallas lost out on the NFC East with:

It’s probably only a matter of time until Cowboys head coach Jason Garrett is fired. But the Cowboys could have still made it into the postseason with some help from the Eagles.

Dallas needed both of the following to happen:

The Cowboys had no trouble with Washington, but the Giants couldn’t give them the help they needed. Dallas will finish 8-8 and miss out on the playoffs.

The Packers will get some much-needed rest during the postseason with:

The Packers took the NFC North crown with their win over the Vikings on Monday night in Week 16. They could then clinch a first-round bye with:

Green Bay got a comeback win in Detroit, securing the bye. The Packers still had a chance to get the No. 1 seed and homefield advantage, but the 49ers’ win locks Green Bay into the No. 2 spot.

The Saints were also still in play for a first-round bye but didn’t get it because:

For New Orleans to get a first-round bye, it needed:

The Saints beat the Panthers, but the Packers and 49ers came out on top. That means the Saints don’t get a bye, though they do get to host their first playoff game.

For what it’s worth, the Saints are 6-1 at home in the playoffs in the Drew Brees era.

The 49ers got the No. 1 seed after a wild Sunday night game with:

The 49ers traveled to Seattle to face the Seahawks, and the aside from being one of the best Week 17 finales in league history, it carried some serious postseason weight. To clinch the division, the top seed, and homefield advantage, the 49ers needed:

They got it, in unsurprisingly dramatic fashion.

It was a similar story for the Seahawks, which could’ve won the NFC West with:

The same big stakes are there for the Seahawks on Sunday night, when Seattle will welcome home Marshawn Lynch.

The Seahawks could’ve locked up the NFC West with:

Instead, the game came down to a literal inch on the field. That was the difference between Seattle being a No. 3 seed and the No. 5 seed.

Not much changed between the Week 16 and Week 17 standings, other than the Chiefs leapfrogging the Patriots.

John Elway: Drew Lock is the only option at QB for Broncos