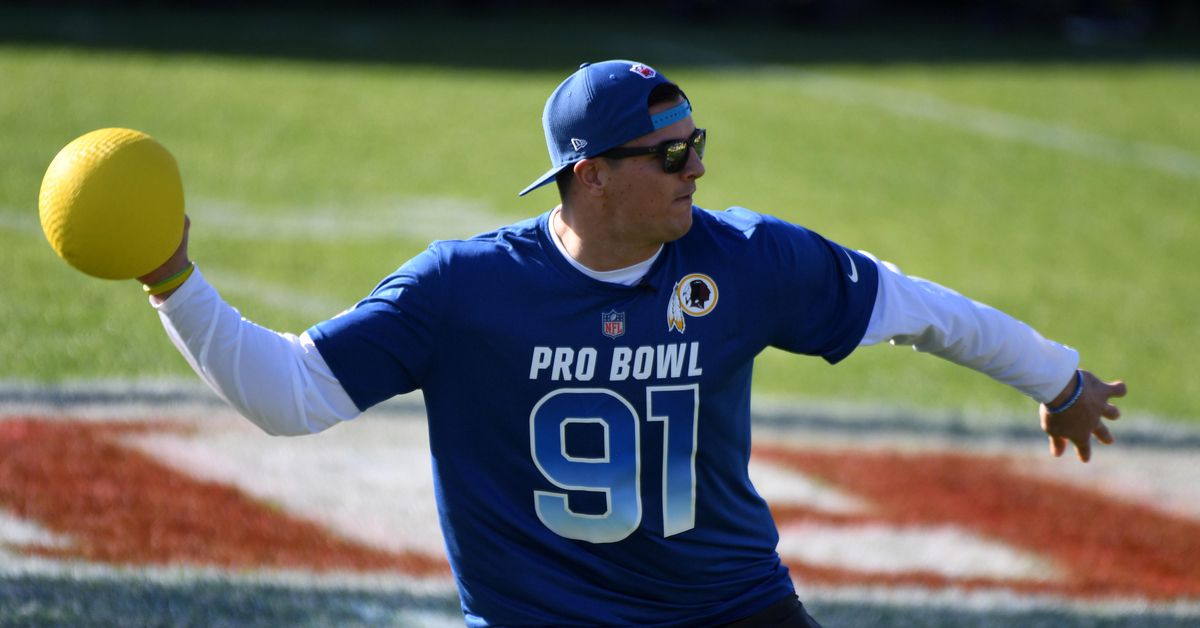 The NFL Pro Bowl is the opposite of fun, at least for most viewers at home. I’m sure the vast majority of players enjoy the experience, especially if it’s their first time. But other than the occasional chuckle at this, this, this or that antic, it’s barely competition and therefore loses a big reason why we all watch sports to begin with.

The Pro Bowl Skills Showdown, however, is pretty dang fun. There are events like dodgeball, drones dropping footballs, and relay races. But the NFL should expand it even more. I’m not talking just making it longer or including more players or even increasing the stakes. I’m talking about some America Ninja Warrior and Legends of the Hidden Temple stuff.

I want to see Akiem Hicks battle Geno Atkins with American Gladiator-style pugil sticks on top of a narrow platform. I want to see if Saquon Barkley can conquer Ninja Warrior’s warped wall. I want a two-man sack race pitting the AFC’s punter/kicker combo against the NFC’s. The dumber, the better. Let’s make it weird.

Fortunately, the NFL did expand things a bit this year, and the events they have added seem fun — a revamped gridiron gauntlet and a “40-yard-splash,” which is the league’s version of a fire bucket brigade — but I want them to go so much further. How much further? Well, here are my suggestions.

This is first and is given the proper treatment of ALL CAPS because it’s GREAT. I mean, it’s not — it’s dumb and the worst. But it’s also great. Do you understand? Doesn’t matter, watch these people get owned.

2. The Temple Run from Legends of the Hidden Temple

If you’re unfamiliar with the Temple Run, it’s basically among the scariest damn things that a child can go through. Legends of the Hidden Temple is a competitive game pitting two teams against each other, and the Temple Run includes the winning team going through a series of rooms within the temple, completing tasks.

AND THERE ARE FREAKY AS HELL TEMPLE GUARDS THAT JUST GRAB YOU AND TAKE YOU AWAY AND YOU’RE NEVER HEARD FROM AGAIN (PROBABLY).

And yes, I do want teams to be designated between the Red Jaguars, Blue Barracudas, Green Monkeys, Orange Iguanas, Purple Parrots, and Silver Snakes.

I play a lot of video games, and in trying to come up with a good one for this list, I tried to find one that was popular enough that the NFL players would be familiar with it. Well that, and one that was SERIOUS DAMN BUSINESS. Growing up, at the arcade nothing determined your worth as a human better than some Street Fighter II, or perhaps Mortal Kombat II.

Because we’re dealing with some of the best athletes in the world, 40 yards can often feel like it’s not really that far. But, speaking as someone incredibly lazy, it’s pretty dang far. And if you’re also navigating a hopscotch course, it’s even farther. Bonus points if this game is relegated to punters, kickers, and linemen.

5. Literally anything from Ninja Warrior

As a program, Ninja Warrior is entertaining enough. There’s a lot more talking about the contestants than I’d prefer — I’d rather just watch those idiots get hit by a giant swinging log or slip off a fake rock and fall into water. Not only is Ninja Warrior an actually impressive test of strength, agility, and skill, it’s also got the gnarly “Warped Wall.” I want to see EVERYBODY at the Pro Bowl take on the Warped Wall.

As a big guy, I’m not here to body shame anyone. Hula hooping looks silly regardless of who is doing it. But let’s be honest, you want to see Quenton Nelson vs. Trent Williams in a hula hooping contest. You really, really do.

Vocals, guitar, bass, and drums. Let’s see who can rock the best, and who has the most beautiful voice.

But I mean, there are literally thousands to choose from.

Who is the fastest player at the Pro Bowl? Who cares?!

Who is the fastest player at the Pro Bowl when it comes to human-sized hamster balls?! I have no idea! Neither do you! Let’s find out.

The greatest of American traditions (and also probably everywhere else because competitive eating is actually kind of a big deal), officiated by Joey Chestnut himself. Let’s see who can pack away the most dogs in a set time. Good thing Vince Wilfork is still retired.