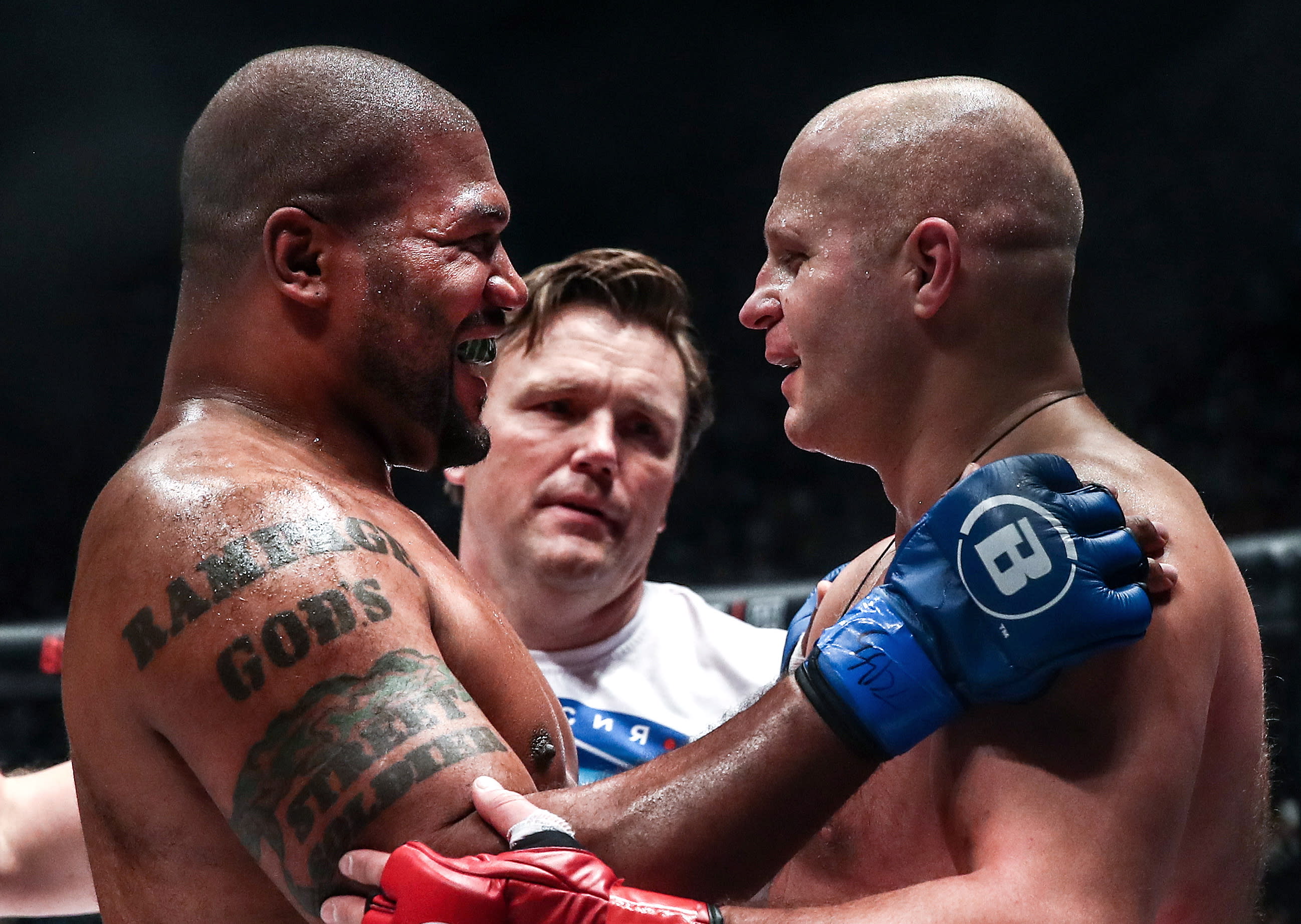 Jackson (L) embraces and smiles with fellow legend Fedor Emelianenko after being TKO’d by Emelianenko (Photo by Valery SharifulinTASS via Getty Images).

Since his days fighting in the Pride organization, Quinton Jackson has always been a fascinating interview. “Rampage” always seemed more earnest and revealing than bombastic or inappropriate or downright harassing or violent as he sometimes was and would increasingly be in on-camera interviews.

Jackson would share sincere reflections, and much of what he discussed was marked by a willingness to be vulnerable. This was after he’d become an international star, but a lot of our conversations came before he won a world championship in the UFC.

Jackson was already deep into his legendary career and in 2014 talked about just how difficult he predicted retiring would be for him one day. He had just won three straight fights and would go onto win his next two. Jackson insisted at the time that despite being a 15-year veteran and having been quite open about his weariness with the fight business as well as the grind of training and fighting certain opponents, he still had fight left in him.

He may not have so much of that in him anymore. Furthermore, there’s no shame in that.

It wasn’t just that he went down so fast from a single shot from Emelianenko, then seemed fine afterward and even celebrated for the cameras. Strikes and how they land and their impact on the human body are weird and unpredictable.

Still, Jackson for years fought with incredible resiliency and would not stop until the referee pried him off his opponent or until he himself was unconscious. So, it was hard to watch Jackson vs. Emelianenko because it is clear he doesn’t have much fight in him between competition, for the training necessary to get in fight shape.

In a way, it wasn’t surprising. Jackson has admitted to not enjoying training camps in the past, and he’s appeared to get in gradually worse physical shape with each passing fight. This bout was at heavyweight, which is not Jackson’s class, and he sported a large gut for the first time in his career.

Jackson has said for over half a decade that a lot of the joy of professional fighting is gone for him, that he’s largely doing it for the money. He still talks mostly about the money, as he did in his message to Instagram followers following his most recent loss.

Quinton Jackson (R) has never looked to be in worse physical condition than he did last weekend (Valery SharifulinTASS via Getty Images).

Five years later, I don’t know if that’s still true. Only he does.

In any case, Jackson has lost three out of his last four, is going down more easily, looks less interested in doing the work necessary to be ready for battle and is showing up in horrible shape, and he’ll be 42 in June. Quinton “Rampage” Jackson has been a professional warrior for a long time.

After two decades of warring he’s built a Hall of Fame worthy list of accomplishments. He’s been an exciting, durable, and elite fighter for so long.

How Jackson will provide for his family, post-competition isn’t known. How he’ll make ends meet after making tens of millions of dollars for promoters (if not more) yet never receiving a salary, not having employment status or year-round employer-provided healthcare, and no pension.

Still, for considerations of health, Jackson should likely be close behind Emelianenko into retirement.

It’s not easy. It never is.

It never could be. Jackson knew it wouldn’t be, when we last spoke.

“It’s going to be the hardest thing I’ve ever done to put up my gloves for good, when I do. It’s going to be hard for me to walk away. I’m going to have to do jiu-jitsu tournaments or something once my body is too busted up to fight,” he said.