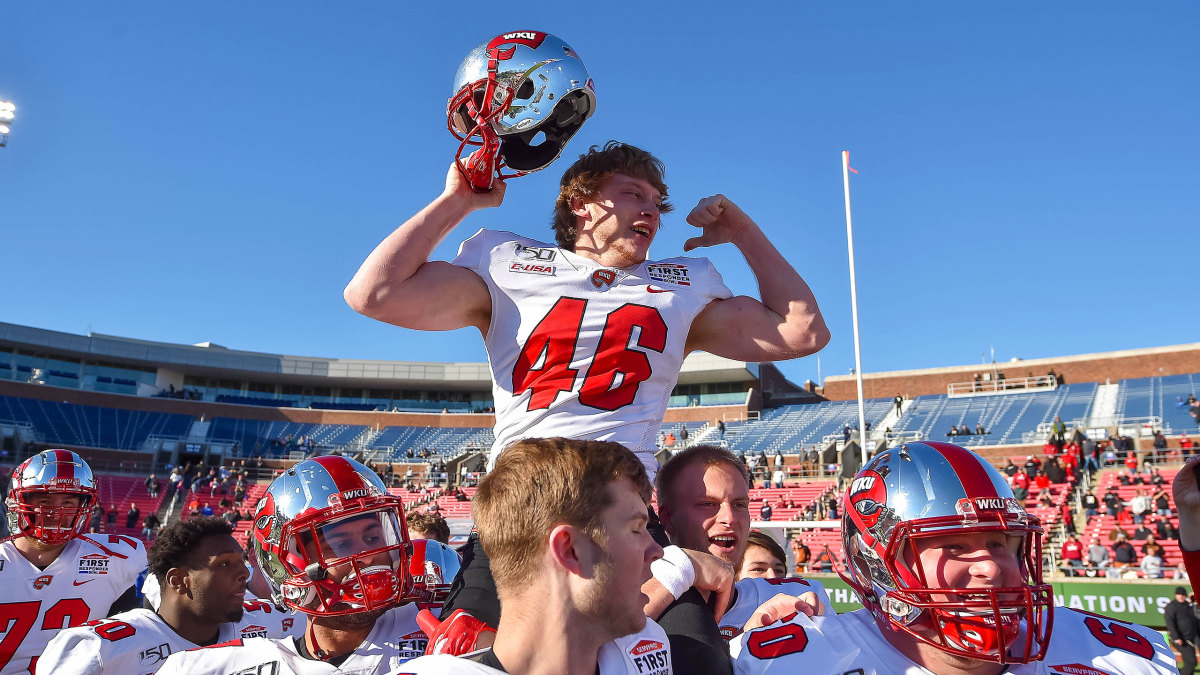 DALLAS (AP) — Freshman Cory Munson kicked a career-long 52-yard field goal with no time left after a rules review to give Western Kentucky a 23-20 victory over Western Michigan in the First Responder Bowl on Monday.

The Hilltoppers (9-4) drove 36 yards in 27 seconds before Munson kicked his third field goal in four tries. The clock had expired and Munson was given the final play after a five-yard defensive substitution penalty against the Broncos for having 12 players on the field. Munson had tied the score at 20 on a 31-yarder with 1:36 to play. He also kicked a 26-yarder and missed from 29.

Kapps’ field goal, his second of the game, capped a 62-yard drive that took 5:35 after Western Kentucky had tied the score on a 15-yard touchdown pass from Ty Storey to Lucky Jackson with 10:40 to go. Jackson had 17 catches for 148 yards.

Western Michigan’s other touchdowns came on a 6-yard pass from Jon Wassink to DaShon Bussell midway through the third quarter and an 88-yard interception return by Kareem Ali in the first half’s closing minutes.

Storey threw a 17-yard pass to Jahcour Pearson in the second quarter for the Hilltoppers’ other touchdown on SMU’s campus.

Western Kentucky: The Hilltoppers will lose only two defensive starters from a unit that went into the bowl season ranked 21st in FBS scoring defense. With Storey leaving, Steven Duncan figures to return to No. 1 after starting this season’s first three games as a junior before injuring his left foot and missing the rest of the year.

Western Michigan: The Broncos will lose five starters each on offense and defense, including their three-year starter at quarterback (Wassink) and the Mid-American Conference players of the year on offense (RB LeVante Bellamy) and defense (LB Treshaun Hayward).

Western Kentucky: The Hilltoppers, who will open at home against Chattanooga on Sept. 5, will again play two Power 5 programs (Louisville again and Indiana) next season.

Western Michigan: The Broncos will return to Notre Dame, where they most recently played in 2010. Western Michigan will also welcome Syracuse to Kalamazoo next season.

2020 opponents for every NFL team: List of home, away games

Many of us are missing the motivation that group fitness classes provide. Whether it's CrossFit, Orangetheory Fitness, barre, yoga, or

‘The Midnight Gospel’ Trailer: Netflix’s Insane Acid Trip of an Animated Series from the Creator of ‘Adventure Time’

R. Kelly’s Bid for Jail Release Due to Coronavirus Denied

Here’s Why We’re Not Too Worried About Geron’s (NASDAQ:GERN) Cash Burn Situation

We can readily understand why investors are attracted to unprofitable companies. For example, although Amazon.com made… Source

How Many Receivers Will Be Selected in Round 1?

NFL Draft 2020 Betting: When Will Jacob Eason be Drafted?

The initiative aims to provide greater access to technology for patient care, speeding scientific research as well as online learning

What Was Your Mom Like When She Was Younger?

Grief in the Midst of COVID-19

At a time when deaths are occurring at rapid rates, there may be many factors isolating the bereaved—and thereby complicating