A married couple who paid $125,000 to have their daughter’s college entrance exam scores altered so she could get into an elite university was sentenced Tuesday to a month each in prison.

Gregory and Marcia Abbott are the sixth and seventh parents to be sentenced in the “Operation Varsity Blues” college admission scandal that saw wealthy parents pay bribes to get their children into top colleges. They each pleaded guilty in May to one count of conspiracy to commit mail fraud and honest services mail fraud.

Prosecutors asked U.S. District Judge Indira Talwani to impose an eight-month sentence and a $40,000 fine. Lawyers for the couple asked for probation and community service.

In addition to prison time, the Abbotts were ordered to pay $45,000 each in fines, perform 250 hours apiece of community service and will remain on supervised release for one year.

LORI LOUGHLIN WAS ‘OBSESSED’ WITH GETTING DAUGHTERS INTO USC, REPORT CLAIMS 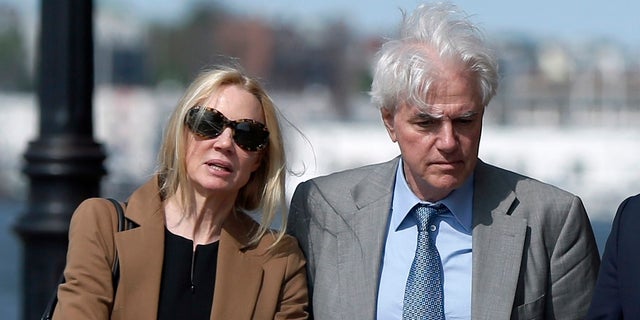 Gregory Abbott requested he serve his sentence in a correctional facility near Otisville, N.Y. while his wife requested doing her time near Dublin, Calif. He also asked the judge to stagger the sentences so a parent can remain with their daughter.

Marcia Abbott will report to prison on Nov. 6 and Gregory Abbott on Jan. 3.

Authorities contend the Abbotts paid  $50,000 to have a corrupt test proctor correct their daughter’s ACT exams in 2018 and another $75,000 to rig her SAT subject tests in math and literature. The daughter was unaware of the scheme.

Prosecutors said the couple used the fact that their daughter had Lyme disease to allow her extra time to take the ACT in West Hollywood, Calif, about 1,000 miles from her Aspen, Colo., home.

Marcia Abbott was hoping to use the higher scores to get her daughter into her alma mater, Duke University, according to the Boston Herald.

Gregory Abbott acknowledged his wrongdoing in a Sept. 27. letter to the court.

“I share the same sensibilities as most people and, strange as it may sound, identify with the public outrage over my own actions,” he wrote.

Gregory Abbott lives in New York City while his wife stays in Aspen. He was chairman and CEO of International Dispensing Corp. until taking a leave of absence in March. Marcia Abbott is a former magazine editor and writer.

The scandal has engulfed wealthy couples and celebrities and put a microscope under the college admissions process. Actress Felicity Huffman was sentenced to 14 days in prison last month after admitting to paying $15,000 to rig her daughter’s SAT score.

Both are fighting charges that they paid $500,000 to get their two daughters into the University of Southern California as fake athletes.

“Let’s say she goes through to trial: If it’s after trial, I think certainly we’d be asking for something substantially higher. If she resolved her case short of trial, something a little lower than that,” Lelling told WCVB-TV.

The Associated Press contributed to this report.

The Most Expensive Drugs in 2020