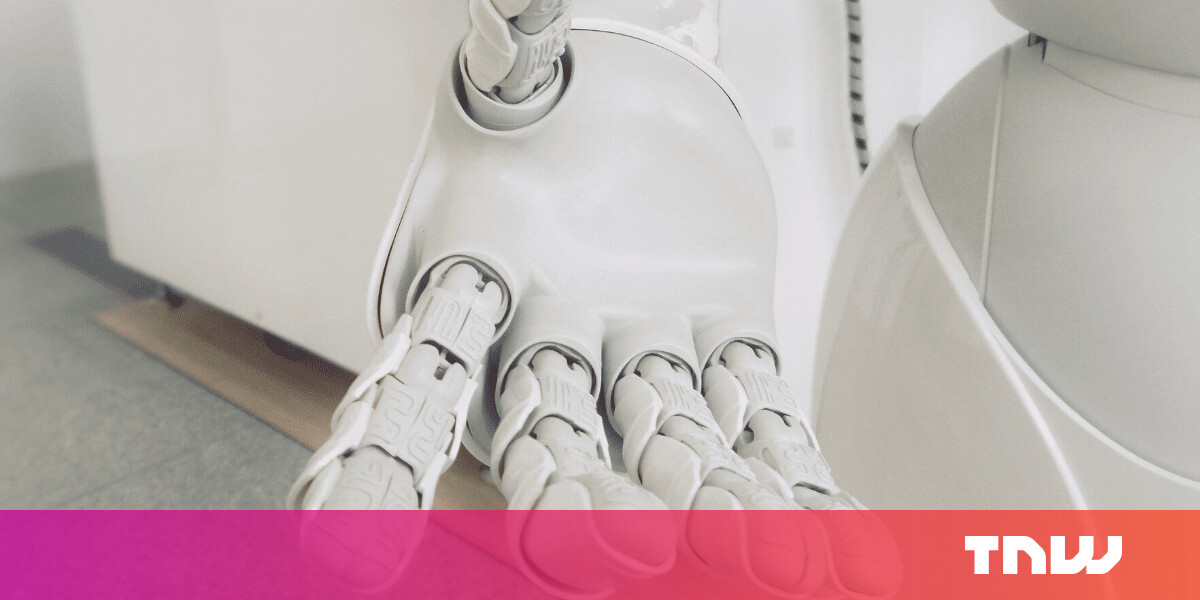 The latest industrial robots look like petting zoo versions of the big machines found in many modern factories – small, cute, and you can play with them. But don’t be deceived by their cuddly appearance. They have the potential to change the way humans work with machines and disrupt the existing market for industrial robots.

The big difference with this new generation of robots is that they don’t have to operate in closed-off areas. Instead they can safely operate alongside and even collaborate with human workers. For this reason, these machines are often called collaborative robots or “cobots.”

Fully automating a factory isn’t always desirable because modern manufacturing companies need flexibility to quickly alter their processes for a variety of products and customization. Instead, manufacturers in such contexts are increasingly looking for automation with a human touch.

This is where cobots can come in. Even if full automation with larger, faster industrial robots is more efficient, cobots can allow factories to increase their output while retaining a degree of flexibility. 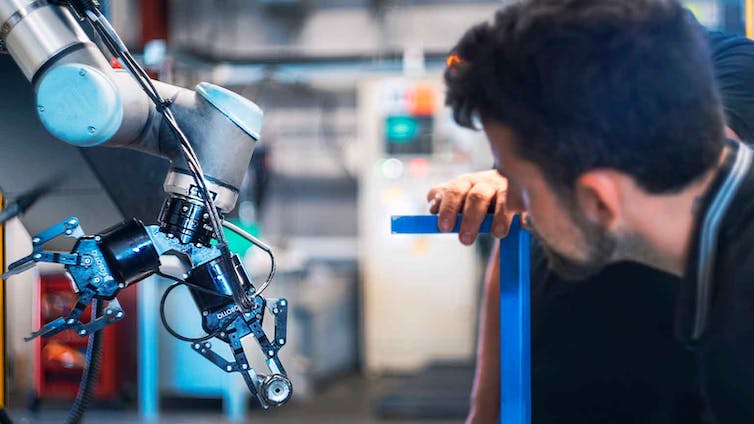 For now, cobots are used for specific tasks. For example, cobots take up the tedious and repetitive task of fastening each of the screws in a battery pack from the hands of their fellow humans. Rather than replacing human jobs, cobots may create new jobs in applications, in which their strength, endurance and precision is combined with human dexterity, flexibility and problem solving.

A promising use is in industrial assembly where multiple parts are integrated in a final product. In this part of the manufacturing process, humans still carry out 90 percent of the tasks. In the future, cobots will pick, place and mount the components, and the human worker will finalize and check the output.

For industrial robots, however, the risk of being replaced by cobots is much more real than for human workers. For now, sales of cobots form less than 5 percent of the market for industrial robots, in which a few large companies still dominate. But we argue the robotics industry is ripe for disruptive innovation by relatively small new entrants.

The incumbent companies tend to focus on conventional, heavy-load industrial robots for large volume manufacturing of cars, electronics or food products. But these robots also overshoot the needs of small and medium-sized firms that lack the funds or expertise to use such systems.

Cobots, on the other hand, can do things that aren’t typically relevant for current customers of large-scale industrial robots, but which are very attractive to other users. For instance, they can be moved around the factory floor and easily be refitted with grippers for new applications.

Cobots are easy to setup and change, highly versatile, and can collaborate with humans. And these capabilities will be particularly relevant as more new customers adopt cobots and find new uses for them. Our research on drones has shown that the potential of new technologies is often beyond what even their manufacturers can envision. 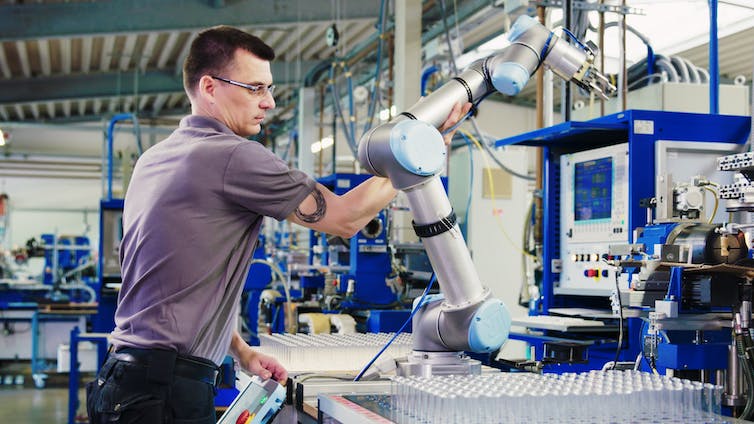 As cobots’ speed, accuracy and ability to carry heavy loads continues to get better in coming years, they will increasingly be able to compete with traditional industrial robots and so there’s a good chance that mainstream customers will also start to adopt them as well.

This poses a problem for the incumbent manufacturers. The likes of ABB, Kuka and Fanuc have a very small market share in cobots in comparison to the new entrants, such as Denmark’s Universal Robots. This is because they are so used to catering to the needs of their existing customers and it is harder to understand the needs of cobot users in the emerging market.

But they could get around this problem by instead listening to their own employees who already use cobots to manufacture industrial robots. This would allow the incumbent firms to learn about emerging user needs and protect themselves from the upcoming disruption.

While it is difficult to predict the future, it looks very plausible that the “social skills” of cobots will end up making them more popular than the industrial robots in the long term. Right now they might appear to be small ponies, but one day cobots could become the versatile and powerful work horses of the factory.

Read next: Why Dutch Railways is following an API-first dev strategy

How much of a genius-level move was using binary space partitioning in Doom?

Visiting Most Haunted Place at Midnight in Lucknow