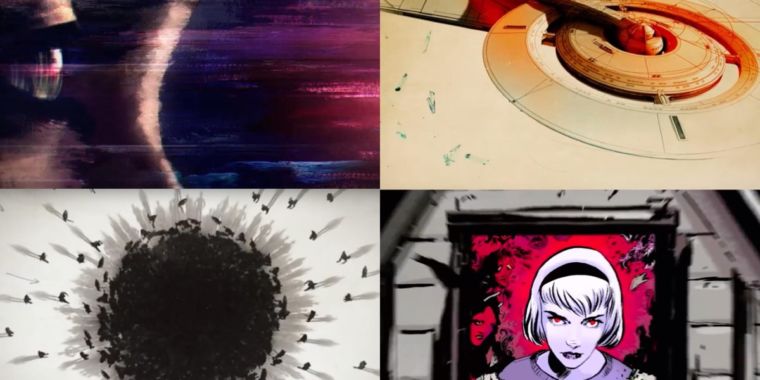 Credit where credit is due —

The Chilling Adventures of Sabrina

The era of peak TV has brought with it a veritable Golden Age of distinctive, innovative main title sequences. So much so, in fact, that there is an entire website, The Art of the Title, devoted to this burgeoning art form, featuring in-depth interviews with the creative people behind all those stunning title sequences. (Fair warning: it’s way too easy to lose yourself down the rabbit hole on that site.)

We made a list of our favorite opening credits over the last decade and quickly noticed that two production houses in particular dominated our selections: Imaginary Forces—which produced the main titles for Counterpart, Stranger Things, and Jessica Jones, among others—and Elastic, the creative minds behind the title sequences for Halt and Catch Fire, Masters of Sex, Game of Thrones, and so forth. Along with Prologue (Star Trek: Discovery, Elementary), it’s fair to say that these houses have played a major role in shaping the art form over the last ten years.

HBO had already flirted with an artier approach to opening credits with its Emmy-award winning sequence for Six Feet Under in 2001 (produced by Digital Kitchen) and the main title sequence for The Sopranos. “It was the premium networks, like HBO in the late 1990s, that began to set a higher standard for viewer expectations,” Alan Williams, a director with Imaginary Forces, told Ars. “TV could be more than just TV. It could be more like film. That type of thinking translated over into other networks.”

“A good title sequence is one that completely honors and encapsulates the story—not the designer or the creator.”

But it was the emergence of streaming giants like Netflix and Hulu and the explosion in original content that really raised the bar for innovative main title sequences and also expanded how such titles are used. “People are now using them before the TV shows come out, as marketing tools,” said Williams. It’s not unusual for a pre-release title sequence to rack up a million or more views on YouTube. And smaller production houses like Imaginary Forces now have access to digital tools to create big-budget special effects at much lower cost.

A main title sequence can serve any number of functions, but first and foremost, it primes the audience for the viewing experience. “A good title sequence is one that completely honors and encapsulates the story—not the designer or the creator,” said Williams, likening the psychological effect to that of a curtain rising in a theater. “It can set rules and boundaries of what the show is going to unfold, you set a mood and a tone. If it doesn’t prepare you and make you want to watch the show, then to me that’s a failed title.” His own personal favorite title sequence actually dates back to the 1980s: the wacky, surreal stop-motion animation at the start of the opening credits for Peewee’s Playhouse.

Without further ado, here are our 15 picks for the best TV main title sequences of the 2010s, presented in chronological order.

Yes, Mad Men technically debuted in 2007, but it ran until 2015, and its main title sequence arguably heralded the golden age that was to come, although its short, 37-second duration was more typical of broadcast TV. Series creator Matthew Weiner came up with the basic concept of a businessman walking into an office, setting down his briefcase, and jumping out the window. It was the folks at Imaginary Forces who turned that into the stylish, sophisticated final product—kind of an updated tribute to the 1960s style of Saul Bass—that captured Don Draper’s dual existence: 1950s family man vs. philandering advertising executive.

The team sought out vintage ads from the 1960s and used them as a backdrop to the sequence, although one in particular didn’t make the final cut. “We had a Sophia Loren image, where our guy was literally falling through her cleavage, and it was just brilliant,” Creative Director Mark Gardner told Art of the Title. Alas, Loren’s agent nixed the idea outright. The biggest challenge was tastefully depicting a man falling from a skyscraper in a post-9/11 world. The solution was to have the falling man “snap out of it,” as if awakening from a bad dream, and return to a composed seated position at the end.

With its elaborate 90-second main title sequence, Game of Thrones transformed the TV landscape in terms of opening credits. The design was spurred in part by the sheer vastness of George R.R. Martin’s many-faceted fictional world. Showrunners Dan Weiss and David Benioff approached Elastic about presenting viewers with a map of the key geographical regions to help orient them to the series. Originally, the relevant piece of the map was intercut whenever an episode moved from one location to the next, but this interfered too much with the narrative flow. So that cartographic tour became the now-famous main title sequence, with its raven-eyed view of the physical landscape as towers rise out of the surface and weirwood trees blossom, with cogs and gears constantly turning below.

The design team found inspiration in the drawings of Leonardo da Vinci, the illuminated manuscript known as the Book of Kells, and Dyson spheres, among other influences. And sharp-eyed fans soon noticed that the bands of the astrolabe featured imagery associated with the prehistory of the events of the show. “Our goal was to try to replicate something that looks and acts like a physical object,” Creative Director Angus Wall told Art of the Title. “You’re going to see this ten times during the first season, and we wanted to make sure that there was room for people to see new things with each viewing.”

We were all wild about Sherlock Holmes in the 2010s, a decade that gave us Sherlock (2010), the BBC’s modern interpretation of Sir Arthur Conan Doyle’s famous detective, starring Benedict Cumberbatch. Two years later in the States, CBS debuted its mystery series, Elementary, in which Holmes (Jonny Lee Miller) is a recovering addict who moves to modern-day New York City—complete with a gender-swapped Dr. Joan Watson (Lucy Liu).

The 30-second main title sequence features an elaborate Rube Goldberg machine, depicting a clear marble rolling along the tracks and setting off a chain reaction of events. “I wanted to communicate how Sherlock Holmes’ mind works in the non-traditional sense of detective work,” Creative Director Simon Clowes of Prologue told Art of the Title. “This is what separates his style from that of other detectives. I thought about how I could playfully represent one thing leading to another, a chain reaction, scenarios becoming the catalyst for something else to happen.”

For Elementary’s title sequence, the team built five pieces of the contraption, incorporating potential murder weapons (rope, a pistol). The chain reaction ends with a small cage falling on top of a human figure—the detective capturing his prey. The idea to use a marble came from a scene in the pilot, in which Holmes uses a marble to determine a building’s floor is slanted. Clowes was also inspired by OK Go’s video for “This Too Shall Pass,” featuring a giant, room-sized Rube Goldberg machine running for the duration of the song.

The Simpsons special short drops on Disney Plus tomorrow

Samsung Galaxy A21 with 3 GB RAM and 16 MP quad camera setup launched in the US- Technology News, Firstpost